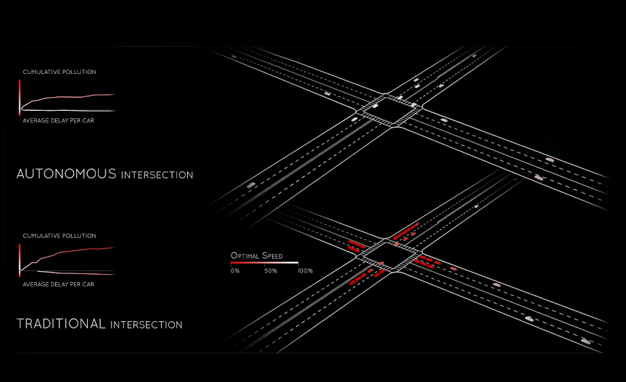 When our cars drive themselves, there will no longer be the need for bright, flashing, colored lights to which humans respond. What will smart, sensor-laden, autonomous cars do when they approach an intersection? That’s exactly what researchers from three countries are trying to work out.

“Traffic lights are a 150-year-old technology originally conceived for horse carriages,” says the website for Light Traffic, part of MIT’s Sensable City Lab. “Will they survive the advent of autonomous vehicles?”

The video above shows a glimpse of what could happen when when traffic signals become more like air-traffic controllers. Each car entering the intersection—automatically, of course—pings a central control system, which then assigns the car a time to pass through the intersection. According to researchers at MIT, the Swiss Institute of Technology (ETHZ), and the Italian National Research Council (CNR), the theory goes like this: By giving every car a specific time slot in which to pass through, the traffic buildup of the past will be solved through complex computer algorithms.

Read more at Discovery News, which says that this system of real-time slot allocation would “double the number of vehicles able to pass through an intersection in a given amount of time,” saving both time and emissions. Claims that researchers are also adapting this system to pedestrians and bicyclists, however, are met with a little healthy skepticism. “Maybe I’ll get over it,” says writer Glenn McDonald, optimistically.

Intersections with real-time slot allocation could handle twice as many vehicles are traditional traffic-lighted ones.

But for now, imagine a future where you can actually manage a left turn in Los Angeles. Where cars act smoothly and rationally because their irrational humans aren’t in control. Where the world won’t have to deal with Pittsburgh lefts, fifteen traffic-light cycles, or other psyche-wreaking nightmares that make modern daily driving such a burdensome thing. Actually, isn’t that the beauty that self-driving cars promise us?